The power of the Hair Tissue Mineral Analysis lies in the interpretation of the mineral profiles. Via the “Four Low” to gluten and epilepsy.

To really work from a coherent perspective, you need a system-coat rack where you can place the information units (history, (lab) examination) to reconstruct and approximate the coherence. The enormous value of the HTMA is that with one test you immediately have various important system variables. It can often give direction to the system diagnostic process.

An example of a case: a boy of 18 years developed epilepsy. There are no events that could be responsible for this. The diagnosis of neurology is “Juvenile Myoclonic Epilepsy”. The syndrome usually manifests itself during puberty and is more common in boys.

The HTMA shows the following image. 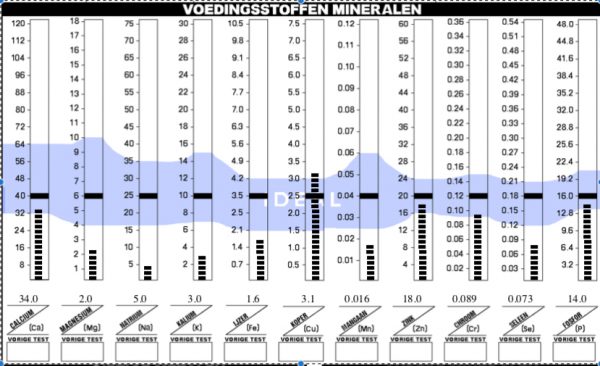 First, our attention should always be on the values ​​and distribution of the 4 macro-minerals Calcium, Magnesium, Sodium and Potassium. We come across a frequently described profile, the “Four Lows” profile. All 4 mentioned minerals are lower than the indicated optimum concentrations (in the hair).

It is a special profile that for decades had the name to be mainly characteristic of a therapy resistance situation. In recent years we know that the cause of this profile is usually at the level of nutrition and intestinal function. A negative reaction to gluten often appears to be an important factor here.

That gluten in particular can also have a strong disruptive effect on the nervous system is, among other things, described in detail in The Lancet Neurology (https://www.ncbi.nlm.nih.gov/pubmed/20170845).

And dr. Favid Perlmutter (neurologist) describes in his book “The Gluten Danger” among others the following (page 20) “I know of many practical cases of patients with epilepsy who have not had an attack since the day they stopped eating cereal products and add more proteins and fats to their meals. ”

Our advice was therefore to first eat only gluten-free for 3 months and then to see further. We are now 9 months further and have never had any attacks.

Any cookies that may not be particularly necessary for the website to function and is used specifically to collect user personal data via analytics, ads, other embedded contents are termed as non-necessary cookies. It is mandatory to procure user consent prior to running these cookies on your website.